I've been doing a bit of R&D stuff with NESmaker behind the scenes, so I thought I'd start on a small-scale project to build on all of this. Introducing Project DART. 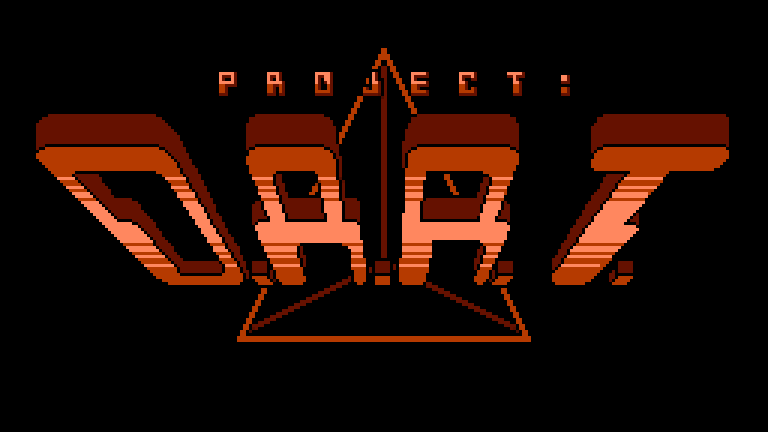 I'm not going to say much specific stuff about what I plan this project to be, I'm just going to post updates as they're finished.

I've been doing some tests with horizontal mirroring and PPU movement to create fast infinite screen-wrapping. I've combined that with Dale Coop's palette-cycling routines to create some fake parallax scrolling effects for the background, though they're more noticeable at slow speeds. Also I've been doing more tinkering with DPCM sample playback and looping with Bxx, which I'm incorporating into the music.


Of course I appreciate any and all feedback!

Special thanks to Kasumi and Dale Coop for helping with many of these features.
Last edited: Jan 5, 2021

Staff member
Wow! Visually the effects are very VERRY impressive!
Congrats, can't wait to play to that game! Maybe at the Byte Off Competition?

Love it. Keep it up.

dale_coop said:
Wow! Visually the effects are very VERRY impressive!
Congrats, can't wait to play to that game! Maybe at the Byte Off Competition?
Click to expand...

Thanks! I was hoping I could pull something together for Byte-Off'20, though I guess it depends on how much people care about enforcing how submitted games must be built during the actual competition period. I think its safe to assume from last year that nobody really cared about that. Most users just submitted their current project they've been working on, and honestly I think that's for the better. I'd rather have Byte-Off encourage people to start making more games than discourage them from starting just because the competition hasn't arrived yet.

The real appeal of Byte-Off for me is just the opportunity to have our projects showcased and given some extra publicity from Joe and other retro outlets. Nobody's gonna care if they were made in a certain time period, they're just happy to see more games being made.

Anyway, mini rant about Byte-Off over, haha. I'll hopefully make something out of this whole project soon.

With Dale Coop's help I can finally properly test this on original NES hardware! We managed to get the INL programmer boards to start flashing with horizontal mirroring.

That's sort of my theme now, isn't it? Haha

Its great that you have Dale helping. Wish there was more people like him out there.

That looks really amazing, Cutter!
I am a little confused why you would have had to switch to horizontal mirroring for it, though. Do you use the second nametable at all?

jorotroid said:
That looks really amazing, Cutter!
I am a little confused why you would have had to switch to horizontal mirroring for it, though. Do you use the second nametable at all?
Click to expand...

CutterCross said:
Thanks! I was hoping I could pull something together for Byte-Off'20, though I guess it depends on how much people care about enforcing how submitted games must be built during the actual competition period.

I'd rather have Byte-Off encourage people to start making more games than discourage them from starting just because the competition hasn't arrived yet.
Click to expand...

I agree. The facebook discussion about this really sucked all the joy and momentum out of my project and I haven't done anything since.

Got another update. This one involves jumping! Yes, jumping. With depth.


This is one of the bigger accomplishments I've done yet with this project. I'm also showing off 2-Player mode, though having only 2 hands makes playing both characters kinda difficult. Also, you're probably going to be able to guess the direction this project is headed towards from the end of the video alone...

I wish there was a better sprite-cycling routine available here because it doesn't look all that good as opposed to other NES games out there. Also going to need to create some proper SFX soon as well. But this is already shaping up quite nicely I feel.
Last edited: Jan 5, 2021

Staff member
This is really impressive. Thanks for sharing this CutterCross
Awesome work on that "Project DART" <3

Small update here. I implemented some new splash screens as well as Dale Coop's palette fades-to-black routines for screen transitions. (And its about time I actually centered my logo correctly.) I'm also showing off the title screen, which now uses the bottom-left nametable for unique nametable data (thanks to jorotroid). So now I also have some vertical scrolling for my title screen, which is another reason why I chose to go with horizontal mirroring. Completely unnecessary, but it looks kinda cool.

The title screen looks awesome. The only very minor criticism I'd give is that the border takes away from the impact of the logo a bit. I liked it more with the black space around it. I hope you don't mind me saying that.

I also agree with you about the byteoff time limit thing.. I'd never be able to make a demo worthy of a comp in that space of time. Like most I only do bits and bats with NesMaker due to other comments and I also don't learn things as quickly as some. I think it's the end result that matters.

Staff member
This Byte-Off competition will be so COOL! Can't wait.
A lot of great projects are starting now... I hope the most of them will be submitted.
(On my side, I have really no idea, no project, ... haha)

I started adding an options menu with some extra features. Right now the ones that are fully implemented are the Sound Test and the Scrolling Test. (I guess "back to title" works too, but that's not really a feature.)


I managed to implement an actual sound test this time. No more faking a sound test by moving to different gameplay screens. Some songs I haven't revealed where they're used yet.

I was messing around with getting diagonal scrolling to work just because I could. I made a sort of Earthbound battle background / screensaver thing that infinitely scrolls down + right, with a slight bit of palette-shifting parallax and movement effects thrown in there as well. Has nothing to do with actual gameplay, it's just supposed to look cool.

I'll be working on getting the rest of the options features implemented in the meantime.
Last edited: Jan 5, 2021

How will you be implementing the scrolling visual into the game? Is it a test see if watching it effects reaction times?, or just a fun cut screen?

It's very advanced stuff.. I feel a bit feable when I see your work. I can't imagine being able to do anything like that, it's so cool.

Jonny said:
How will you be implementing the scrolling visual into the game? Is it a test see if watching it effects reaction times?
Click to expand...

You know, I didn't think about it that way before, haha.

It's not really going to be a part of the gameplay itself, it's just a bonus thing I threw in there because I could. There's not really a good way to implement diagonal scrolling like this into the actual gameplay portion, at least nothing I could feasibly pull off. It's just here for funsies.
You must log in or register to reply here.
Share:
Facebook Twitter Reddit Pinterest Tumblr WhatsApp Email Share Link
Top Bottom